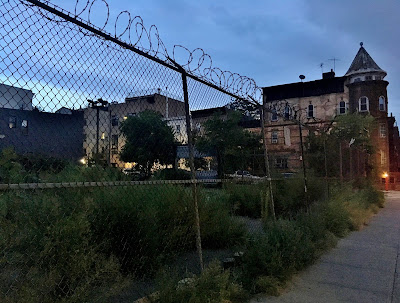 The dog reacted badly to the move.  Familiar streets walked from a different home base confused and frightened him.  He refused to turn up certain blocks and one time slipped his collar and bolted.  The prospect of walks set him panting and trembling.  When it was time to go out, he hid.

He's much better now.  The panting and the trembling has gone.  Indoors, he lounges rather than skulks.  When we're out, he still wants to set his own, seemingly arbitrary routes, but is easily coaxed to compromise.  It's as though he's resetting his place in a tilted world, mapping the design of his new old territory.

I'm the same, minus the trauma.  I find I don't miss the old house a bit.  I love this geographic rearrangement.  What's your immediate neighborhood?  Five, ten, twenty blocks?  Even a short move changes the radius, and sets a lot of the regular walks into reverse.  The angles are all different.  Even a street you've walked thousands of times is new again.  For that, and this shift in the altogether right direction, thanks.


Posted by onemorefoldedsunset at Wednesday, August 21, 2019

I hope the poor little fellah is getting more acclimated to his new routes.

Thanks! He's so much better now, & if he could, would like to go on longer night walks than he used to, sniffing round the quiet streets near the cemetery.