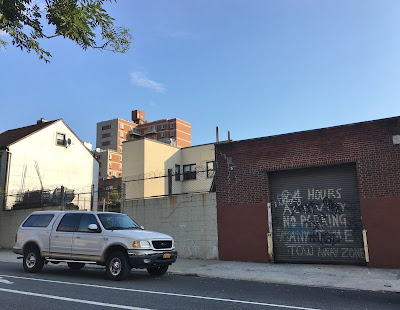 Demolition plans have been filed for the warehouse and adjoining rear structures at 114 - 118 15th Street, between Fourth & Third, but new residential building has not yet got the go-ahead.  Plans for a five-story, twenty unit building were disapproved in June.  Though modified, the warehouse building at right is likely the same one standing in the 1940s (see below). Where the warehouse stands today there was once a mixed-use building, that in 1903 included a store (unspecified), and a beauty parlor.  A 1920s Eagle help ad lists a need for a man to drive a "wet wash wagon" and the People's Wet Wash is mentioned in a later, 1930s ad. By the 1940s "mangle room girls" are required at the Hop Wah Wet Wash business at the same address. 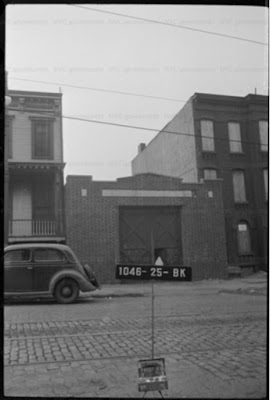 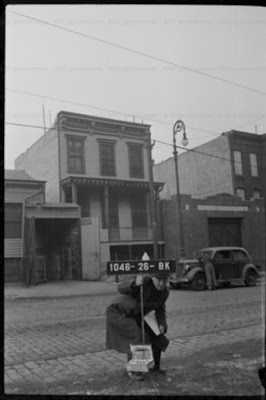 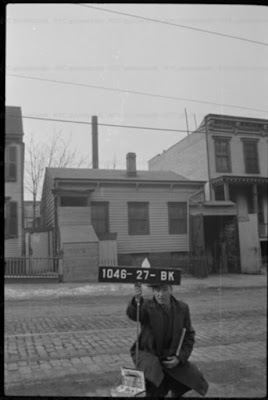 118th is a curious looking building.  There are pass-through doors, easily identified at right, but the boarded-up portion at the left of the building is hard to figure out.  In 1896, the Eagle ran a story on the release of Dr. Thomas Gallagher, imprisoned in London on a charge of "complicity in dynamite plots, " and the attempts of his Brooklyn family to raise the money to bring him back home.

120 & 122 15th are still standing, and both have entrances to their back yards; the one at 120 is a narrow side entrance, but the one at 122 is a substantial pass-through. A 1903 map indicates stable buildings at the rear of both buildings.  An Eagle ad from 1892 describes the store space at 122 as the "best candy, stationary, cigar and variety store for sale in Brooklyn," and mentions its proximity to Public School 40.  The 15th Street school was originally a wooden building, housing the primary section of PS 40, before a brick structure replaced it, and connected to the brick school building on the 16th Street side. The school no longer stands.

If the store had stayed in business at the same address for thirty-six years, 122 15th would date to at least as early as the mid-1840s.  But the earliest map I could find that shows a house on the lot is from the 1890s. Maybe the candy business moved from another location.

By the 1940s, 122 is still presented as a great spot for a luncheonette or candy store, and the school is still mentioned for its market potential.

In 1946 several men were arraigned on charges of operating an illegal still at 122.  A 500-gallon still was found on the premises. 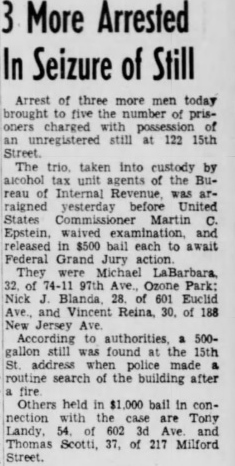 The store space at 122 is still occupied, albeit in a sleepy kind of way, its windows revealing old paintings and photographs, cameras and dolls and antique scales.  I'm pretty sure there's another kind of business - framing? - operating here too.   It's one of those places with irregular hours that I've passed countless times & always meant to visit, but never have.  Time to get moving. 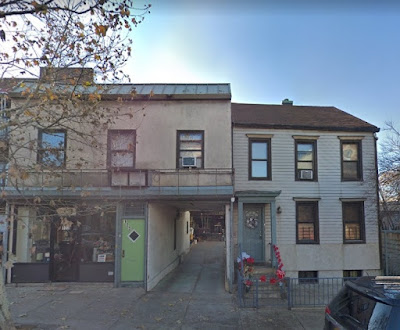 (All black & white photographs from the DOF Tax Photos Collection)

8/13
An interesting Tweet by Joshua Mullenite (thank you!) identified Dr. Gallagher as a dynamitard, and included a link to a London Review of Books review by John Horgan, written in 1983:

A secret Clan na Gael memorandum exactly a century ago, two years after the inauguration of the 1881 Fenian bombing campaign in London and Liverpool, vowed to ‘carry on an incessant and perpetual warfare with the power of England in public and in secret’. That warfare has been intermittent rather than incessant: but the Christmas bombing in London offers devastating evidence of its durability.
The dynamitards, as the Fenians were known by their frequently frustrated opponents in the intelligence services, were capitalising on a new technology – the invention of high explosives.


Though the term dynamitard was commonly associated with Fenian activists, in the States at least it was used more broadly for any political/revolutionary bombing or bomb-making activity at the turn of the century.  The Eagle, for example, employs the term to reference "dynamitards from Italy," and suggests "Wallsall dynamitards" were manufacturing bombs to be used by Berlin "revolutionists and anarchists."

According to the Eagle story on Gallagher, his brother-in-law, Mr M. Connolly, resident at 118 15th Street, claimed that he was "satisfied, personally, that the doctor never had the slightest connection with any plot to blow up the English house of parliament or any other buildings in Great Britain," but this sounds like a rote response, and the doctor would certainly have found Fenian dynamitard sympathizers close at hand. Consider the description of this meeting at Columbia Hall in January of 1884: "No Such Thing as Honorable Warfare- How England Herself Used Dynamite. Three Hundred Thousand Irishmen Ready to Adopt Scientific Means for Fighting the Enemy" (Eagle).

Is there a body of research on Brooklyn dynamatrists?  I'd love to find out more on the South Brooklyn connection.
Posted by onemorefoldedsunset at Monday, August 12, 2019