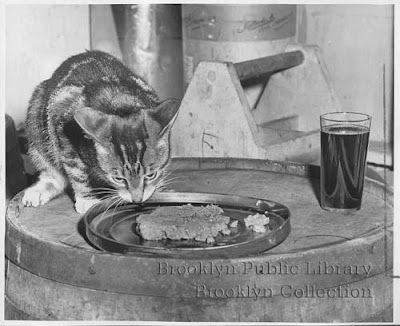 "Wined and dined--'Maggie,' company mascot of the Garrett Company [a winery located at 882 Third Avenue], prepares for a feast of cat food and will wash it down with a glass of Virginia Dare red wine .." (Brooklyn Eagle, 1952, Brooklyn Collection)

There's no longer any Virginia Dare red at 882 Third. The sweet wine was still popular in the mid-twentieth century, but later fell out of favor. The company headquarters, which were originally situated in North Carolina, were moved to Brooklyn in the early 1900's and then to California. Eventually the Virginia Dare wine brand expired. It was revived by filmmaker/winemaker Francis Ford Coppola in 2011.

When Francis Ford Coppola was a boy, he never saw a dinner table that didn't have a bottle of wine on it. And so he was very interested in all the wine companies of the day, and one in particular. A gracefully curved and embossed bottle with the image of a lovely woman who looked like a fairy tale princess. And he remembered the song on the radio that sung about Virginia Dare, the classic American wine that featured her image.

During Prohibition, the Garrett Company made their wine alcohol-free and began to produce alcohol-based fruit extracts. This expansion proved enormously successful. While the wine company is long gone from Third, the Virginia Dare Extract Company stayed on at the Brooklyn address.  It's been there since 1923, which makes it another Third Avenue veteran.  Today its better known specialty extracts include coffee, tea, vanilla and cocoa.  While its headquarters remain in Brooklyn, the company also owns a manufacturing center in Shanghai. In 2016 the company 're-tooled' its brand identity.

“Consumers want products that offer health benefits without compromising taste,” said Michael Springsteen, Vice President of Business and Product Development. “Whether it’s removing an off-note with a masking solution or enhancing sweetness without adding sugar, our Taste Collaborations™ promote better taste without compromising clean labels.”
Combining its substantial knowledge of sourcing and producing natural flavors with its formulation expertise, Virginia Dare brings together science, market insights, and sourcing to create business advantages for its partners. The company’s refreshed brand will more effectively tell that story to better demonstrate its value to the food and beverage industry.  (Business Wire)

Virginia Dare herself was born in today's North Carolina, in 1587. Her parents were members of the "Lost" Roanoke Colony, and Virginia was reputedly the first English child born in North America. Dare has had something of a brand evolution too, and her name continues to resonate with all the mixed associations of purity, tradition and pioneer spirit.  Her image is a pliable one. She's a well-known folkloric figure in North Carolina, and a boon to the tourist trade. She's been adopted as a feminist icon, but her name has also been invoked in anti-suffrage causes rooted in racism. She continues, as the purported 'first white child in America,' to serve as a figurehead in white supremacist movements. Her name is currently used at the website VDARE, which the Southern Poverty Law Center has described as "an anti-immigration hate website" which "regularly publishes articles by prominent white nationalists, race scientists and anti-Semites."


Posted by onemorefoldedsunset at Friday, July 07, 2017