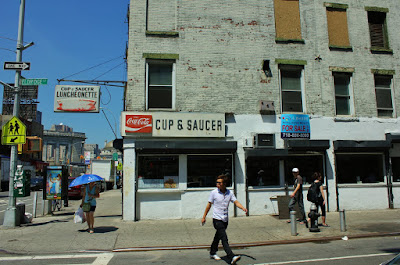 The diner sits just off the entrance to the Manhattan Bridge along the border of Chinatown and the Lower East Side, at the corner of Eldridge and Canal Streets. It opened in the early 1940s, when the area was dominated by immigrant families and businesses. It has had three sets of owners, Mr. Vasilopoulos said.
Both he and Mr. Tragaras are from Greece and immigrated in their youth. Mr. Vasilopoulos’s brother is married to Mr. Tragaras’s sister. They now live in Astoria, Queens, “with the other Greeks,” Mr. Vasilopoulos said.
Through it all, the diner, including the décor, has remained reliably the same.
“Do you see the cup and saucer on the floor, and the stools?” Mr. Vasilopoulos asked, pointing to an image on the tiles and faded mustard spinning stools. “They’re original.” (NY Times)

The very recent closure of the Cup & Saucer diner, on Canal Street,  has been covered in numerous New York papers, online journals and blogs.  With the diner's rent raised from $8,000 per month to an impossible $15,000, the owners were unable to keep the business open, though they're considering re-opening in another location.

I don't have anything of consequence to add to all the Cup & Saucer eulogies, except to say that anytime I was on that part of Canal it lifted my spirits to see the Cup & Saucer still there.  Over the last few years there were rumors of the building's sale, and I was always a little worried if I hadn't been by for a while.  But there it always was.  When I eat in a diner my choices mostly boil down to a) hash & eggs, b) a BLT (light on the mayo), or c) a very occasional burger & fries.  I like the burgers at Joe Juniors, and if I'm in a Polish diner I might just go for a d) or an e) or even an f), but elsewhere I mostly choose breakfast.  Even though I've lived in the city for over thirty years, I still get a here-I-am-in-New York! kick out of ordering eggs sunny side up or over easy.  I might have just arrived I'm so absurdly pleased in trotting out the words.  At the Cup & Saucer it was strictly hash & eggs at the counter.

The old-school diners are in decline - The Stage on Second was another real loss -  at the mercy of rapacious landlords and changing demographics.  I still have some favorites though, and every so often I'll discover an (old) new diner home.  Apart from an occasional splurge, I'm not much one for high-end dining, and I hate wasting money on indifferent, over-priced food in bland, flavor-of-the-moment settings.  I'd rather eat Portuguese in Jamaica, family-style Greek in Astoria, or a bowl of marag on Atlantic.  I'd rather cram into the Pearl and join a lunchtime democracy of hungry eaters. It's the company you keep that's part of the pleasure, that reminds you of all that's good about New York, of the places that welcome & absorb all of us, new in town or regulars, in a busy booth, or seated alone.  We can't believe our luck to be a part of it all. 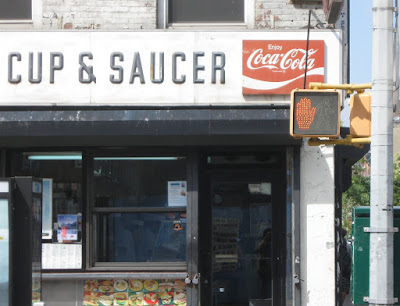 Posted by onemorefoldedsunset at Wednesday, July 19, 2017

Belated thanks, Brian, I always appreciate your comments.