In 2009 the Henington Press, which had been in business since 1912, shut its doors for good.  Jeremiah's Vanishing New York wrote about its imminent closure back in December of 2008, and linked to WNYC's lovely audio interview & video tributes.  For the last couple of years the place has been closed, though at one point a wine bar was promised.  That project died (oh what a shame) but finally, this spring, a framing business - Shadowbox, run by Jennifer Kahrs - moved quietly in. It was sad to see Henington sell up and go, but at least its replacement is a real, hands-on craftsman's shop rather than a cocktail emporium/wine bar/chattering ninny space.  Good luck, Jennifer! 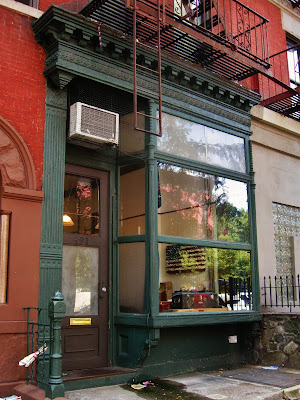 Posted by onemorefoldedsunset at Monday, August 08, 2011