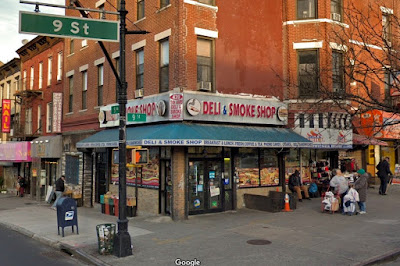 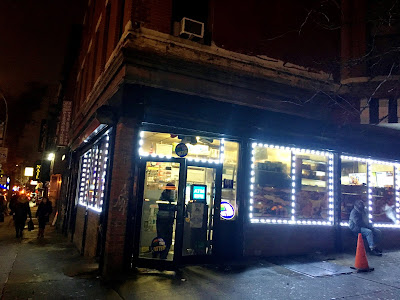 The calls to 311 started to pick up steam about a year ago.
They were complaints about an arcane New York City statute requiring special permits for businesses to hang signs or awnings larger than six square feet.
The caller — or callers — was clearly targeting certain commercial strips, making complaints in batches, as on Nov. 26, when calls came in reporting 25 businesses along a two-block stretch of Eighth Avenue in Sunset Park, Brooklyn. The businesses did not have a license for their signs, the complaints said.
But it wasn’t just a couple of days of calls, city data shows. In Brooklyn, the hardest-hit borough, 234 calls about illegal signage were made to New York City’s help line in November — compared with 23 the same month last year. And the calls are still coming in.  (NY Times)

There have been almost 2,000 complaints about illegal signs called in to 311 this year.  The majority of them concern businesses in Brooklyn, with store owners in Sunset Park and Bay Ridge particularly hard hit.  Owners have received Department of Building fines of up to $20,000, and forced to take down their signs and awnings, many of which were erected long before the current store owners set up business.  The heavy fines have sent a wave of panic among small business owners, many of whom are taking preemptive action by removing their signs to avoid being reported to 311 and subsequently fined.

While many store signs technically require city permits, in order to ensure they are safe, this doesn't appear to have been a DOB priority until the unusually large number of complaints required investigation.  But just exactly who is calling in to make the complaints, and why, remains a source of speculation. Could it be sign companies?  Could it be connected to a City-led revenue drive?  Some store owners feel the complaints may reflect racial bias.

Those affected by the fines are asking for a fairer system of enforcement, with reduced penalties, and advance warnings on bringing signs into compliance.  With the support of other City Council members, Rafael Espinal is calling for legislation to put a moratorium on the current surge of fines:

Espinal’s bill now being negotiated between the Council and the administration calls for those who have paid the fine to receive waived permit fees, and expedited permit process for the new sign. There is also discussion for assistance in paying for the new signs. For those that have yet to pay, they will only have to pay 25% of the base fine. There will be a year long moratorium on the Department of Buildings (DOB) issuing of any business awning or sign violations, and an interagency task force established to better coordinate educational outreach.   (King's County Politics)

There's empty space above the grocery store at Fifth & 9th Street today.  The store was hit with fines in recent weeks, and a worker there told me they're fighting the violation in court.  The current scale of fines is unduly punitive to small businesses, who often operate with on paper thin profit margins.  Let's give them a fairer chance to keep afloat.


Posted by onemorefoldedsunset at Friday, December 14, 2018