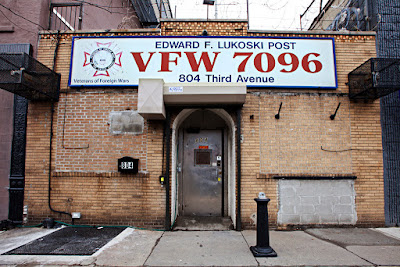 VFW Post #7096 has been at 804 Third Avenue since 1956.  When it opened, there were around ninety active posts in Brooklyn.  Today the VFW website lists fifteen.  Post #7096 sits in the shadow of the Expressway, right around the site of the Gowanus village the Dutch settled almost four hundred years ago.  Before it was a VFW Post, this was Klonowski's Bar & Grill, one of the many waterfront saloons along the avenue.  Today the building's windows are bricked in, and it's hard to get a look through the small grilled window in the door.  Unless you're a vet or an invited guest, you might have passed by hundreds of times without knowing what goes on inside.  A knock on the door changes everything. 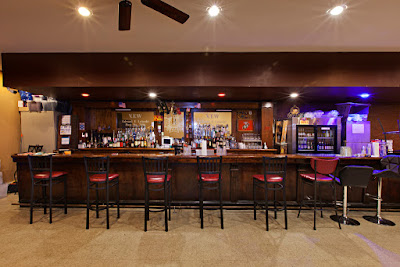 Over the course of a couple of blustery winter afternoons, I sat at the bar at #7096 & talked.  I spoke to Christopher Leon, who has served as Post Commander since 2013, and Mickey Velasquez, who held the same post for a year, succeeding longtime commander Ken Dunn.  Both men are Brooklyn born and work close by, at the MDC.  Both saw active duty in Desert Storm, as Marines, and both have sons in the services.


When you step in the Post, you'll see it's been recently renovated.  The paint still looks fresh.  A fix-up was on the cards for years; the building was deteriorating and the back room, used for Post functions and party rentals, had become unstable due to water damage.  Before I visited the place, I'd read several accounts of a long and contentious dispute between the VFW and CBS (who owns the next-door property), but this was a story of the past, no longer up for conversation. 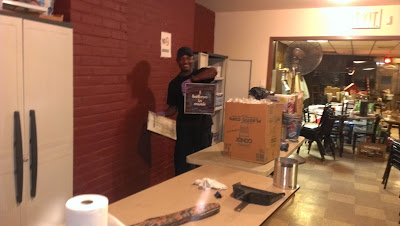 The work to fix things up was a hands-on effort by Post members, and donations from local businesses helped.  Home Depot was especially generous. 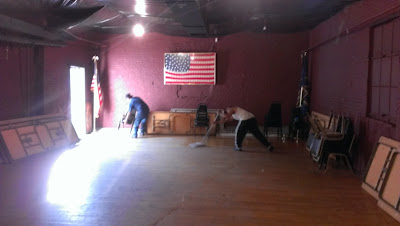 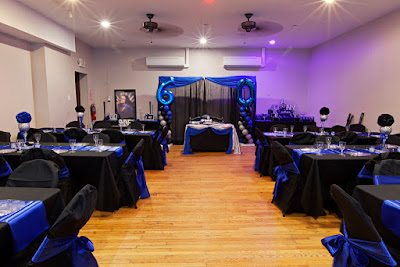 The back room is available again to non-members for party rental, and at the time of my visit it was set up for a lavishly decorated 60th birthday party.  The rental fees help with operating costs, but rooms like these serve an equally important purpose: they make a VFW Post a place not only for veterans, but also a central part of civilian lives.  Larry Racioppo remembers how important the Parisi-Torre Post #8903, nearby on 22nd Street, has been to his family:

My extended family has been having parties here as long as I can remember - christenings,  first communions, confirmations, birthdays, etc.. St. John the Evangelist our local church, where most of the religious ceremonies took place, was just a few blocks away.
In 2009 my cousin Joe came up from Atlanta to have his 60th Birthday party here. 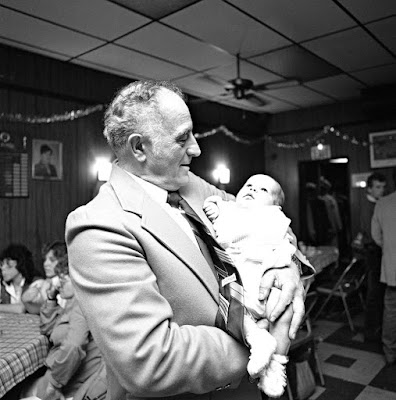 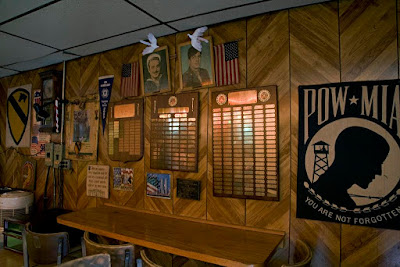 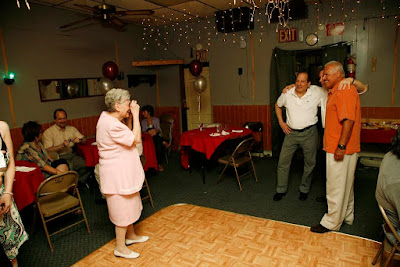 
I have to admit I wish I'd visited Post #7096 prior to its renovation.

The bar at the Lukoski Post remains in place today, but the photographs and Color Wall, the jukebox, the arcade games and the pool table have vanished.  While some of the Post-related memorabilia will be back on display again soon, the machines are gone for good.  I asked Chris if the jukebox, at least, was making a return, but he said no, it wasn't what the younger guys wanted any more.  And he's right.  The pictures show a cozy, clubby, paneled bunker of the 50's or 60's.  They readily play tricks on the senses.  Memories and nicotine have seeped into every square inch of the rooms, and just looking at these photographs, my clothes seem to accrue the smell of cigarettes. It's a comforting sight if you're over fifty, but it's not a scene for a young veteran in, say, his or her twenties or thirties. 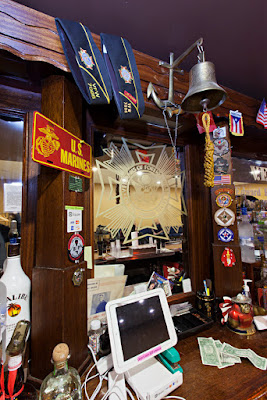 Behind the bar, there's a copy of the booklet that commemorates the Post's opening.  Aviation Machine Mate Edward F. Lukoski, another Brooklyn native, who attended local PS 10 as a child, died in 1943 when the aircraft carrier U.S.S. Franklin was bombarded by Japanese aircraft. 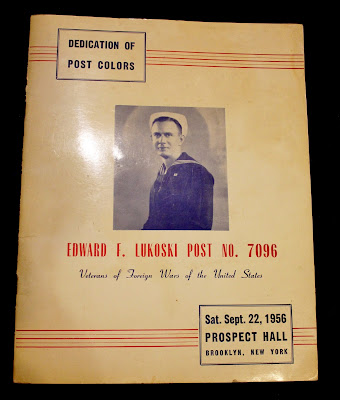 The booklet is a time capsule. The ads build a picture of the local businesses of mid-twentieth century South Brooklyn, with phone numbers bearing the SO South Brooklyn or ST Sterling exchanges. Candy stores, ship-scalers, taverns, delicatessens, appliance stores.  The White Eagle Market (later Eagle Provisions) is listed, along with a score of other Polish businesses and family sentiments - a reflection of the neighborhood's sizable Polish population. 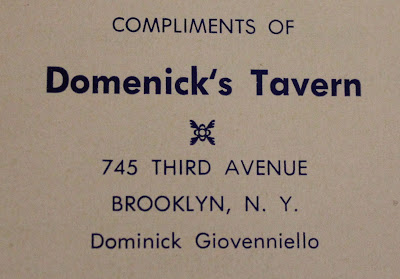 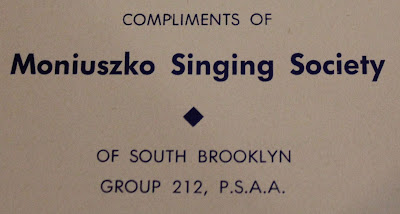 As I turned the pages, I recognized just three places still around today: Our Lady of Czestochowa, Joseph Duffy Funeral Home, and the Bay River Liquors ("Brooklyn's largest liquor store").  The closely related spheres of spirits and the spiritual linger the longest. 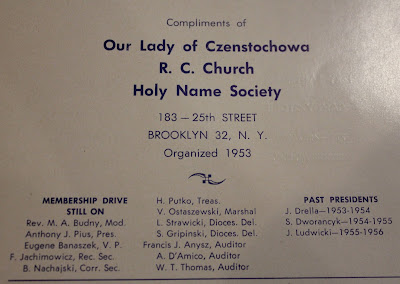 The Post's new looks are a point of pride, but right now, the bar room looks too bare.  Chris plans to decorate it and bring back some of the earlier displays, and add more recent contributions.  He wants to liven the atmosphere of the place while still acknowledging its early history.  He wants to make it relevant.  Talking to Chris, you sense his resolve.  He's taken on his role as Commander with a good deal of energy, but it's a tough mission, nevertheless. 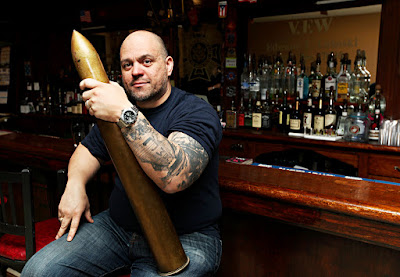 Today enrollment at the Post stands in the sixties.  Although the roster includes veterans from recent combat, recruiting younger members in any number remains a challenge.  Somewhat ironically, the most recent recruit is a wheelchair-bound veteran of the Second World War.

Mickey believes that demographics - the sheer numbers of troops who have seen active service in Iraq and Afghanistan - and the common lapse of time between a veteran's military discharge and his or her joining the VFW will bring a boom in enrollment within the next decade, but Chris isn't so sure. Looking back to older pictures of the Post in post-war decades - when veterans, spouses, children, filled the place - he'd like to recreate the same lively atmosphere, but he understands how different the pattern of family life is different today.  Now, in most households, both parents juggle the dual demands of career and family; as the parent of four children, three of them young girls, Chris shares the shuttles to swim meets, and after-school activities, and all the rest of the to-and-fro of modern family life.

Along with a busy family calendar, patterns of entertainment have changed too, and an older-style Post atmosphere doesn't work so well for younger generations.  Declining VFW membership is a national issue, and it's generally accepted that fresh approaches to Post operations are needed.  These have included a focus on health and fitness (including pain management clinics), volunteer opportunities like Habitat for Humanity, art therapy and displays of veteran art, public speaking classes, enhanced networking opportunities, and a conscious effort to welcome female veterans. Some Posts have had striking successes by reworking the old VFW model. Chris cites Long Island as having one of the nation's strongest VFW enrollments, with a tight veteran community support system, and the ability to draw in younger recruits, but in the city, the scene is sparser.  Some of the urban Posts in booming cities may find other demographic challenges too.  Post #7096 is sited in a waterfront neighborhood targeted for gentrification, and the cost of housing here is now well beyond the budget of many working and middle-class families.  As the neighborhood becomes more affluent and younger, and older businesses fade, there's less connection to the older institutions.  The area, like the Post, stands at a point of transition. 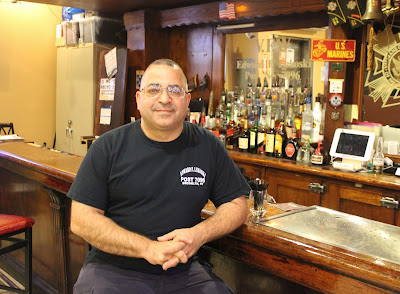 The longer I spent talking to Chris and Mickey though, the more respect I gained for their strength of purpose, especially their dedication to preserving the Lukoski Post, and to meeting the needs of a new generation of veterans.  Take Mickey's life, for example.  He believes he was destined for the military.  His grandfather served in World War II, and his mother sang him to sleep (or so the story goes) with the Marine Corps Hymn.  When his parents went out in the evening to a show, or dancing, it wasn't a teenage girl who came to babysit for Mickey & his brothers, but Butch and Paul, Vietnam vets who put the small boys through their paces with military training workouts in the family basement.  The kids loved it, and it was a surefire means to get them tired out & ready for bed with none of the usual while-the-cat's-away babysitting malarkey.  By sixth grade, Mickey enrolled in Marine Corps cadet training, in Williamsburg, and as soon as he was old enough, he enlisted.  He served from 1981 to 2001, and from 2001 to 2014 he was in the Army National Guard. His unit was based at Battery Park right after 9/11.  Though he now lives in Staten Island, and could easily attach himself to a VFW post closer to home, he calls #7906 his "living room."  He's as committed to the place as he is to the VFW values of "selfless service."  No longer enlisted, he's still eager to give back to his community, and on call to serve the needs of his fellow veterans.  He can't envision life any other way.


The VFW's historical mission has always been one of advocacy - of lobbying for post-service benefits & support services for American veterans - and the local Posts provide veterans with a local and caring support community.  Given the nature of modern warfare, today's veterans have a greater need than ever. Next month, on April 28th, #7096 will be celebrating Patch Day, and the Post's 61st anniversary.  Civilians are welcome to attend.  Go visit - you'll be made welcome.  In an increasingly polarized and indignant America, it's more important than ever to take the time to open doors. 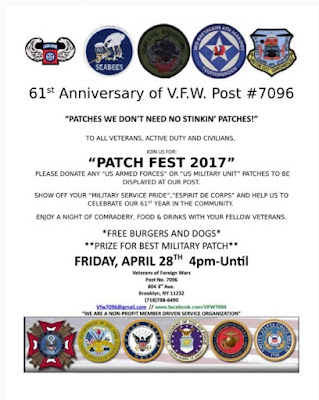 This piece will also be posted shortly at Brooklynology, the BPL's Brooklyn Collection blog.  Larry Racioppo's work is currently included in the Brooklyn Collection's exhibition celebrating the 150th anniversary of Prospect Park.  The exhibition runs through May 26th at the Central Library, Grand Army Plaza.

Posted by onemorefoldedsunset at Wednesday, April 12, 2017

Larry and his Dad really look alike. What a treat to see.