Well, our house is still standing, despite the half-hearted weatherproofing of its newly exposed side wall.  Planning permission for a new apartment building next door was denied (for now), and a DOB inspector who came by last week said that there can't be a sign-off on the demo until the work done on our side is fixed. It seems construction superintendent Marie Grasso's work has been found, once again, wanting.
Ironically, before light is taken away by a bigger building, our yard has become sunnier than ever before, with southern light streaming in through the rubble strewn lot late into the afternoon.  Things are growing back there.  The lilac's in bloom, and raspberry canes beginning to flower.  I've a bunch of young plants  - herbs, young lettuces, sweet peas - ready to put in.  At the bottom of the yard, our shed has almost disappeared beneath ivy.  The shed, built in 1928, is a bit of an anomaly these days, surrounded as it is by renovated properties.  It has a dirt floor inside, and is festooned with cobwebs.  Tendrils of plants creep through its walls.  It smells of hay and garden tools. A neighbor who owns a couple of buildings & lives off rental income saw it a few years back and insisted there was money to be made from leasing it out, but I remained skeptical & unenthused.  I have, however, always expected to open the door one day to find an unofficial tenant or two making a home there - a rat or two, or maybe a sleeping raccoon - but this, fortunately, has never happened.  I did find a bagel in the ivy one time - part of a squirrel stash, I guess. 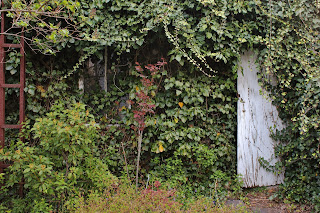 Posted by onemorefoldedsunset at Friday, April 26, 2013

Yes! How much do you think?